The map shows how the Garden, which covers 54,000 square meters, is divided into several paths. The Belvedere located at the top of the cypress boulevard; followed by the Temple in the wood and finally the Verzura Theatre and the Little Lake are found at the two ends of the central avenue. While the Carpini Boulevard is the lower path.

During the restoration of the Villa, a new link was opened, consisting of the bridge that leads to the private Garden of the family, or the Secret Garden, which was not in the original plans, although it is from the end of 19th century. This part with its Italianate little garden, flowerbed and parterre, is characterised by a Nymphaeum. 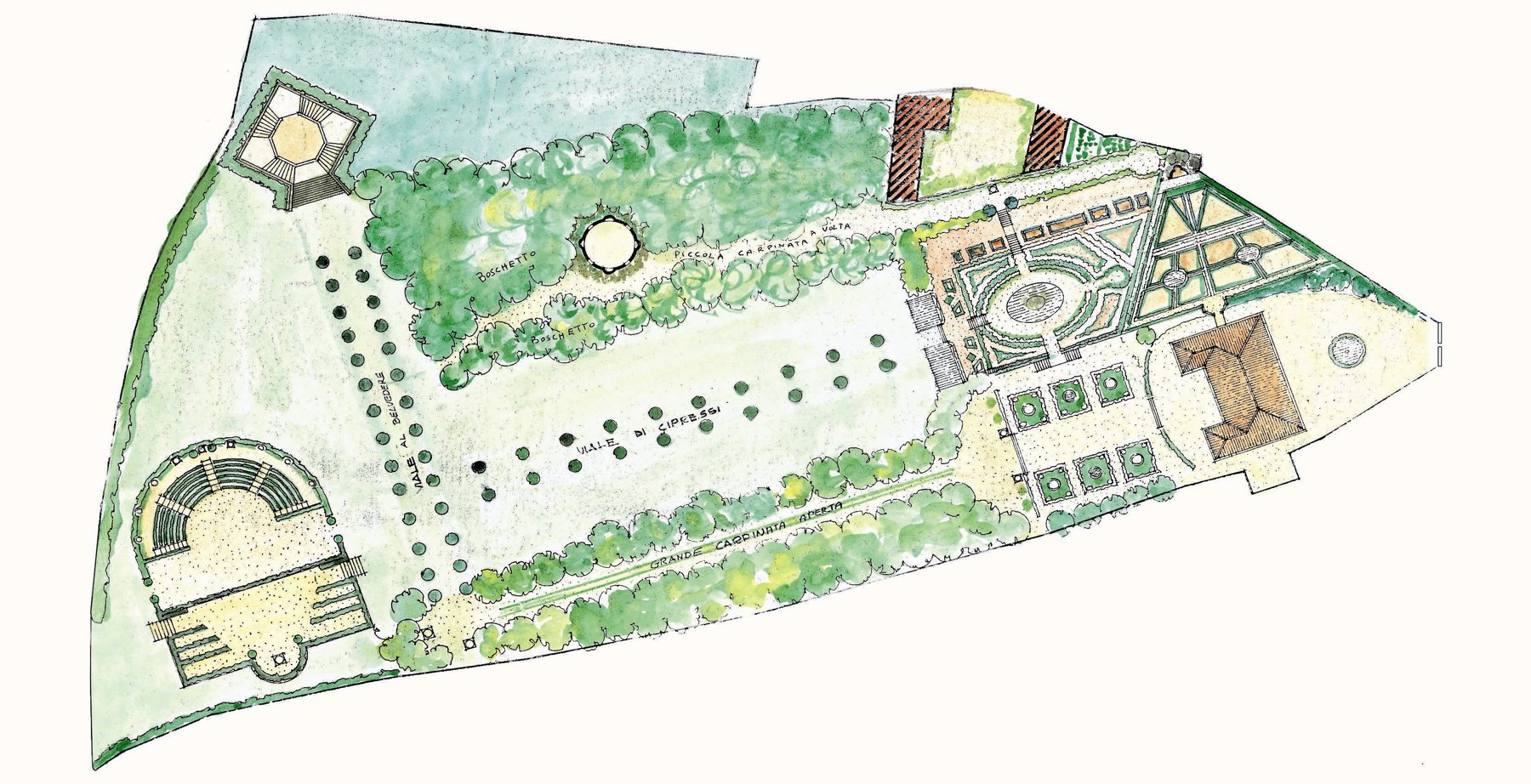 Belvedere The Little Temple The Verzura Theatre The Small Lake

Located in the highest point of the garden, the Belvedere is one of the most important parts of the composition.
A central staircase in stone splits in two  at the sides to embrace a terrace of octagonal shape, framed by a balustrade with columns in limestone.
The  Belvedere celebrates  the Virtues: at the sides of the ramp of stairs are placed two statues, Wisdom to the left and the Abundantia to the right. At the centre of the tower there is a niche, inside which stands the statue of Concordia.
On the balustrade are six statues of small dimensions, which represent the fertility of the earth, abundance and victory.
The allegories of the virtues of the Belvedere are probably representative of the family Rizzardi, which positions them at the garden’s most scenic  point.

Next to the grove of oak and sessile oak – where the informal garden of the pure and wild comes alive – here, you will find the Little Temple, with its distinct form of “open sky rotunda”.
Here the juxtaposition and contrasts are represented.
The bare and unadorned, external surfaces contradict the rich interior decoration of river pebbles, which mark the classic architectural order of the niches.
Outside the neglected appearance of a romantic ruin, inside the rigour of logic.
The statues inside the niches reinforce these contrasts: Hercules and Venus represent instinct and  passion, Apollo and Diana moderation and  reasoning.

At the intersection of the two avenues of cypresses, there is the entrance to the Verzura theatre, formed by box hedges, cypress trees and hornbeams and here are located two statues representing the two muses of tragedy, Melpomene and Talia. The structure is classic: a raised scenic space, in which we find hornbeams and cypress trees in the form of a linear stage wings,  semicircular  rows or ‘cavea’  of boxwood, as a backdrop to these, there are  9 alcoves containing statues of deities.
At the centre is positioned Jupiter, right an alleged Apollo, Ceres, a pair of cherubs and Mercury while to left are two playful cherubs, Juno, other cherubs and another boy.

After the wood and small hornbeam forest you arrive in the most geometrical and meticulous part of the  garden: the Nymphaeum that dominates the Secret garden close to the Villa and the Small Lake surrounded by walls of laurel.
The Nymphaeum – not present on the original drawing, acts as a dummy waterfall with a basin at the bottom,  at the edge of which is the statue of a reposing river deity added subsequently – has three sectors: two small lateral arches and a central niche of stalactites that.
The oval pond surrounds the allegorical sculpture of Water, personified by a girl with an amphora between her hands. Below her, a dolphin recalls the sea and two cherubs the principle of love.